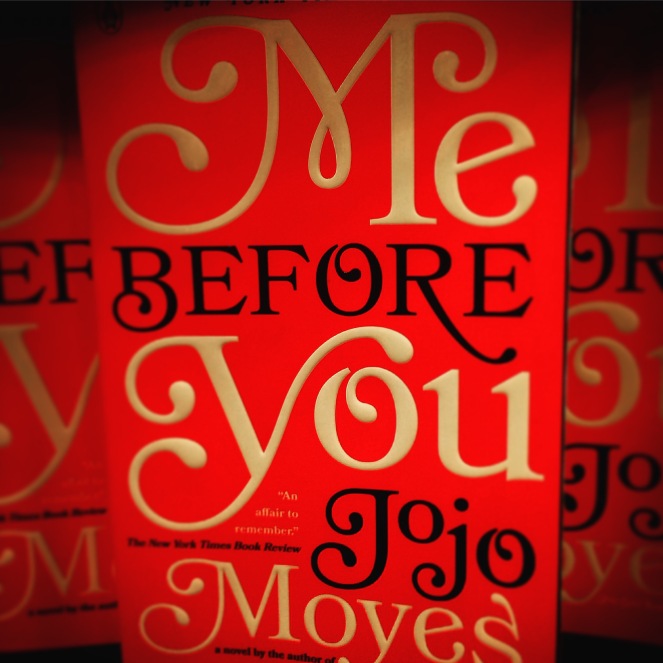 Me Before You
By Jojo Moyes
Penguin Books

They had nothing in common until love gave them everything to lose . . .

Louisa Clark is an ordinary girl living an exceedingly ordinary life—steady boyfriend, close family—who has barely been farther afield than their tiny village. She takes a badly needed job working for ex–Master of the Universe Will Traynor, who is wheelchair bound after an accident. Will has always lived a huge life—big deals, extreme sports, worldwide travel—and now he’s pretty sure he cannot live the way he is.

Will is acerbic, moody, bossy—but Lou refuses to treat him with kid gloves, and soon his happiness means more to her than she expected. When she learns that Will has shocking plans of his own, she sets out to show him that life is still worth living.

A Love Story for this generation, Me Before You brings to life two people who couldn’t have less in common—a heartbreakingly romantic novel that asks, “What do you do when making the person you love happy also means breaking your own heart?”

I had planned to do away with my system of rating the books I review using a 1-5 Star chart, but this book, this thoroughly extraordinary book, deserves to be rated as such.

I still have a proverbial “book hangover” from this book. It’s a heart-wrenching novel, filled with thoughtfulness and soul; one that induces a whole new process of thought about life, death, and the imperfect in-between.

Moyes tackles a subject that has dominated headlines in recent years, packaging it in a way that really focuses thought on what is right, what is fair, and what truly matters. Everything progresses in a believable, authentic manner and the novel followed through to the only possible ending, one that stays undeniably true to who the characters are presented to be throughout the novel. Every event that readers are privy to is not only necessary to the plot and denouement but to the characters themselves. Each episode reveals a little more of the heart and soul, the pain and pride that make up Lou and Will. Nothing feels out of place or extraneous and nothing feels left out. I am trying hard to refrain from revealing anything about the novel, because this is one that most certainly shouldn’t be ruined. I will say, however, that it tackles tough, controversial subjects that, at second glance, stretch far beyond the pages and into our world.

Moyes gives us delightfully flawed and sincere characters in Will, who spends more time looking at what he had and lost than what he initially finds in Louisa, who can almost be too caring. Will tries to cope with his paralysis using wit, sarcasm, and by building wall after wall. He is unable to accept the loss of the life he once enjoyed and wants no part of the life he has been dealt. Louisa is an odd bird, a perfect storm of eccentricity and self-proclaimed normality who just wants to please everyone she can. When Lou comes to help Will’s family take care of him, she finds that he often runs off his caregivers with his snark and depressive episodes. Lou, who needs the money to help provide for her own family, refuses to back down easily and provides a match for Will. Both are headstrong and opinionated, and their early battle of wills are humorous albeit far from light-hearted. When she finds out what Will has planned and just how deep his unhappiness is, she resolves to help him find a new joy in life. This is especially poignant to readers as some of Lou’s own painful memories are uncovered. Furthermore, the relationships that the duo maintain with other characters, particularly their respective families are interesting and realistic. I particularly love Lou’s relationship with her family. It is far from perfect, with her often being the main breadwinner, but they care for each other immeasurably.

I can say without any doubt or hesitation that Me Before You is my favorite of the books that I have read this year, despite the fact I spent the last quarter of it in abject despair and alternately crying and staring thoughtfully into space, wondering what I would do if faced with Will and Lou’s respective situations. The novel makes no apologies and it is unflinching in its reality. I have already pre-ordered the sequel, After You, and will be in line the minute the store opens. If you click away from this review retaining only one message, let it be this: go get this book. Read it, absorb it, love it. Now excuse me while I go find some more tissues.

The film adaption of Me Before You, starring Emilia Clarke, Sam Claflin, Matthew Lewis, and Jenna Coleman is currently in post-production and is slated to be released in the USA on June 3, 2016.

Jojo Moyes worked on the screenplay for the film adaptation.

The sequel, After You, will be published late this month on September 29th.

One thought on “Review – Me Before You by Jojo Moyes”