Hello friends and fellow bookworms! Welcome to my first Featured Favorites post! Every so often, I will post a review of sorts about a book or series that I have read that is particularly special to me. It will be similar to your average review because I will give information (without divulging secrets) about the books and why I recommend them. Unlike the average book review, which is usually written after having read a book once and is often a reaction piece, these little reviews come after several readings, often with many years between the first reading of the book and this post. I hope you enjoy this new aspect of my book blog! I really want to share some favorite reads in hopes that other readers get the chance to love them as much as I do!

The Bloody Jack Series (AKA The Jacky Faber Series)
By L. A. Meyer 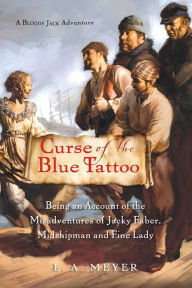 Under the Jolly Roger – Book Three

Almost every avid book reader, young and old, has that series that they grew up with just as the characters themselves grew too. I was fortunate to have two such series: Harry Potter and the Bloody Jack series.

The seafaring  adventures of Mary “Jacky” Faber are not as macabre as the title suggests. L. A. Meyer’s twelve-book series is a fun romp through history featuring battles, pirates, trips down the Mississippi, circuses, finishing school (yes finishing school), and much more.

The story begins with young Mary Faber, barely surviving on the poor streets of London in the early 1800s. Mary, an orphan living under a bridge with a gang of other children, must resort to begging, thievery, and her ability to read to survive. One day, things go terribly wrong and she realizes that, to keep herself alive, she needs to leave London, perhaps once and for all. Posing as a young boy Mary, now Jack/Jacky Faber, boards one of His Majesty’s ships and sets out to sea.

In the Belly of the Bloodhound – Book Four 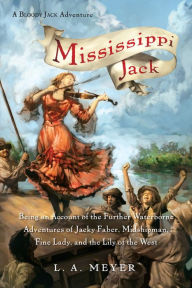 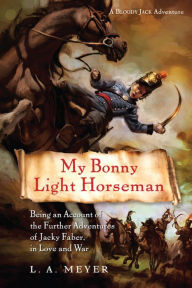 One of the best things about this series is, of course, Jacky Faber herself. She’s spunky and smart, fun and resourceful. But I have to say that her best quality is that she is realistically flawed. She made me feel as though I could have been her…you know, provided I was born in the late 1700s, blond, and English. Jacky makes some bad choices, granted, but she makes some really great choices as well. Growing up, she was a friend and sister figure. After reading her stories, I always felt so empowered to have fun and exciting adventures, to be proud of the nerdy, imaginative girl that I was. Jacky made no apologies for who she was: flawed, rash, a little crass, but tons of fun. Probably one of the best heroines I have ever had the fortune to read about.

There are other characters I love from Amy, Jacky’s bookish best friend (ring a bell?) to Higgins, Jacky’s dear friend and business partner. I even loved the snooty and narcissistic Clarissa Worthington Howe. L. A. Meyer provides a huge cast of characters, but introduces and revisits them in such a way that it is hard to confuse them or forget about them. There is such a wide variety of characterization as well so each new person is believable and just adds to the fun.

Rapture of the Deep – Book 7

The Wake of the Lorelei Lee – Book Eight

The Mark of the Golden Dragon – Book Nine

As a history buff, I loved getting to see so many historical settings and events through Jacky’s eyes. Without giving too much away I will say that, through Jacky, readers witness several well-known battles, meet famous pirates and painters, and visit familiar cities. And while some of Jacky’s adventures and troubles seem a little far-fetched, they are on par with stories like Forrest Gump, where the protagonist often finds themselves facing well-known events or people. The main thing about Meyer’s books, however, are that they are fun! Sure, there are often deathly serious moments as well as clever commentaries on culture and society. There are also romantic moments and sad moments.The fact is, I always knew I was in for an adventure whenever I purchased the latest Bloody Jack book.

Like many other series, waiting for the next book of Jacky’s adventures were excruciating. So I would happily reread the ones that were already out while I waited. I envy new readers who don’t have to wait, now that the entire series is published. For those of you who well understand the feelings of book hangovers, let me tell you this: this series will give you a SERIOUS book hangover. I didn’t read anything for days after finishing the twelfth and final book, Wild Rover No More. What’s more, L. A. Meyer passed away  shortly before the last book was released, giving an extra sense of finality to the series. It was heartbreaking in many respects.

The Jacky Faber books are often classified as teen fiction, but truthfully, it has a very fluid fan base. I am 25 years old and I love the series just as much as I did at 12, if not more. When I have children, I will read these books to them. Until then, I will settle for recommending them to you.

So if you are looking for a fun romp through history and around the world, or if you just want to see another strong and vivacious female lead, don’t hesitate to pick up Bloody Jack.

For more information on L. A. Meyer or Jacky herself, visit http://www.jackyfaber.com/

“You’ve got to think of the fine times you had with your mate, not the moment of his perishin’. Every tear you shed now only wets his windin’ sheet and disturbs his rest.”– L. A. Meyer, Bloody Jack: Being an Account of the Curious Adventures of Mary “Jacky” Faber, Ship’s Boy

All book cover photos are courtesy of barnesandnoble.com.

The photo of L. A. Meyer is courtesy of jackyfaber.com.

7 thoughts on “Featured Favorites – The Bloody Jack Series by L. A. Meyer”