I apologize for the late book haul post. One of my cats passed away last week and I have been having a hard time getting myself to work on the blog. I had him for 17 years and he was such a sweet boy. (I have included a picture of him below, if you would like to see him). He was old and not doing well, so it was his time and we made sure he was peaceful and comfortable. I miss him so much but I am glad he is at peace now.

This haul was a little smaller than January’s. I’m trying to be much smarter about my book-buying habits. As before, the haul only includes the physical books I purchase. Eventually I’ll be able to mix in the digital ones as well, but the physical ones make for a better picture.

I’m excited about all four of these books! They are going to be amazing!

Beauty and the Beast: Lost in a Book
By Jennifer Donnelly

Smart, bookish Belle, a captive in the Beast’s castle, has become accustomed to her new home and has befriended its inhabitants. When she comes upon Nevermore, an enchanted book unlike anything else she has seen in the castle, Belle finds herself pulled into its pages and transported to a world of glamour and intrigue. The adventures Belle has always imagined, the dreams she was forced to give up when she became a prisoner, seem within reach again.

The charming and mysterious characters Belle meets within the pages of Nevermore offer her glamorous conversation, a life of dazzling Parisian luxury, and even a reunion she never thought possible. Here Belle can have everything she ever wished for. But what about her friends in the Beast’s castle? Can Belle trust her new companions inside the pages of Nevermore? Is Nevermore’s world even real? Belle must uncover the truth about the book, before she loses herself in it forever.

I first saw this book on Jennifer Donnelly’s Facebook page and knew immediately that I had to have it. Not only is Beauty and the Beast my favorite Disney movie (Lion King is a close second) but with the new movie coming out (CAN’T WAIT) I had been wanting to do a post this month about the history of the Beauty and the Beast story and all of its incarnations in literature. Plus, who doesn’t want to read about Belle and a book? 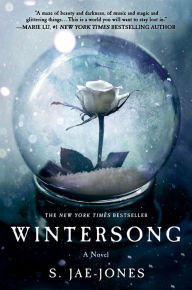 The last night of the year. Now the days of winter begin and the Goblin King rides abroad, searching for his bride…

All her life, Liesl has heard tales of the beautiful, dangerous Goblin King. They’ve enraptured her mind, her spirit, and inspired her musical compositions. Now eighteen and helping to run her family’s inn, Liesl can’t help but feel that her musical dreams and childhood fantasies are slipping away.

But when her own sister is taken by the Goblin King, Liesl has no choice but to journey to the Underground to save her. Drawn to the strange, captivating world she finds—and the mysterious man who rules it—she soon faces an impossible decision. And with time and the old laws working against her, Liesl must discover who she truly is before her fate is sealed.

This is one of the books I had requested on NetGalley but because I am not a veteran NetGalley user and haven’t had as many opportunities as the long-time users, I was unfortunately passed up to read this book pre-release. HOWEVER, I’m totally okay with that because it would have been hard to justify buying this gorgeous copy if I already had a free one. I was totally captivated by the cover and requested it on NG without even reading what it was about. I don’t know why, but book covers with glass/crystalline items like bottles, crystal balls, etc, always draw me in. I’ve heard great things about the book as well, so I cannot wait to read it. 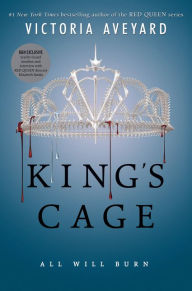 Mare Barrow is a prisoner, powerless without her lightning, tormented by her lethal mistakes. She lives at the mercy of a boy she once loved, a boy made of lies and betrayal. Now a king, Maven Calore continues weaving his dead mother’s web in an attempt to maintain control over his country—and his prisoner.

As Mare bears the weight of Silent Stone in the palace, her once-ragtag band of newbloods and Reds continues organizing, training, and expanding. They prepare for war, no longer able to linger in the shadows. And Cal, the exiled prince with his own claim on Mare’s heart, will stop at nothing to bring her back.

When blood turns on blood, and ability on ability, there may be no one left to put out the fire—leaving Norta as Mare knows it to burn all the way down.

I have a confession to make: I have not read Red Queen yet. I know, I KNOW – It’s crazy to buy the final book in a trilogy when you haven’t even read the first one but I can’t help it. The books sound so amazing, I bought them all purely on faith in my fellow reviewers. I will be doing my best to read them all this year!

Whatever you’ve heard about Caraval, it doesn’t compare to the reality. It’s more than just a game or a performance. It’s the closest you’ll ever find to magic in this world . . .

Scarlett has never left the tiny island where she and her beloved sister, Tella, live with their powerful, and cruel, father. Now Scarlett’s father has arranged a marriage for her, and Scarlett thinks her dreams of seeing Caraval, the far-away, once-a-year performance where the audience participates in the show, are over.

But this year, Scarlett’s long-dreamt of invitation finally arrives. With the help of a mysterious sailor, Tella whisks Scarlett away to the show. Only, as soon as they arrive, Tella is kidnapped by Caraval’s mastermind organizer, Legend. It turns out that this season’s Caraval revolves around Tella, and whoever finds her first is the winner.

Scarlett has been told that everything that happens during Caraval is only an elaborate performance. But she nevertheless becomes enmeshed in a game of love, heartbreak, and magic with the other players in the game. And whether Caraval is real or not, she must find Tella before the five nights of the game are over, a dangerous domino effect of consequences is set off, and her sister disappears forever.

Welcome, welcome to Caraval . . . beware of getting swept too far away.

This was another book purchased based solely on my trust in my fellow reviewers. Out of the hundreds of reviews I have seen, I have only encountered a few negative ones. I can’t wait to read the book and see if I love it as much as everyone else!

Have you read any of these books? Did you like/dislike them?

Here’s a photo of my kitty. Ignore my husband.