This Wednesday’s T5W is, of course, themed to represent the new year! A Fantastic end to my first month on the Top 5 Wednesday group!

In case you aren’t familiar with T5W, it’s this great community on Goodreads created by Youtube book blogger Gingerreadslainey and hosted by Sam of Thoughts on Tomes. Every month group members are given topics for every Wednesday of that month to discuss on their respective platforms (blog, vlog, etc). 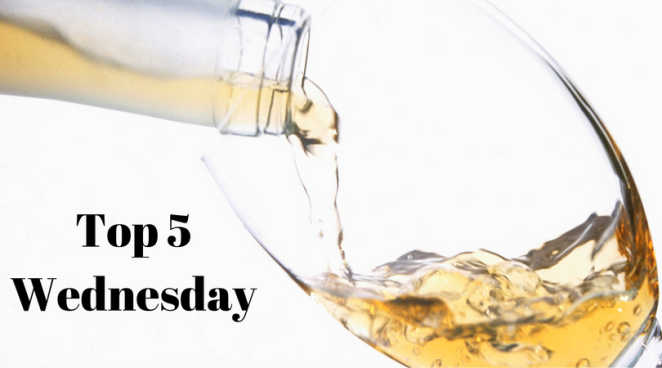 December 28th – Characters You’d Invite to Your New Year’s Eve Party
Pretty self explanatory. Who would you want to your NYE bash and why?

As much as I would love to say I would invite Draco Malfoy (movie, not book – Tom Felton is quite lovely) I know that the former Death Eater would put a damper on my party, so he’s definitely out. I would however invite Hermione Granger. Perhaps my favorite character in literature, she’s bad ass, smart, not afraid to stand up for her beliefs, and I bet she would be a great person to talk to about all sorts of topics! You know, if my party at all had a discussion portion (it might, I’m a Ravenclaw after all). Finally, I feel like Hermione would be great for the party planning/co-hosting: she always thinks ahead, she has a bigger-on-the-inside beaded bag, and can perform some mean repelling/protection spells so the party won’t be crashed by anyone we don’t want it to.

Also, just as an interesting aside, while I was looking for a good photo for Hermione, I found a quiz that determined how like Hermione I was. I got “Mostly Hermione” (not a Gryffindor, parents aren’t dentists, etc).

You got: Mostly Hermione
You’re not completely there, but you’re pretty darn similar to Hermione Granger. The two of you would probably be pretty great friends!

I know technically this is a twofer, but you can’t have one without the other. Fred and George would have the best ideas for party fun, in my opinion. Plus they could bring some awesome bits and bobs from their shop! Win/win

Oh Tyrion. The lease-loved by his own family but arguably the most popular character in George R. R. Martin’s beloved A Song of Ice and Fire series
(and its television counterpart), Tyrion is extremely intelligent, well-read, and a total lush.  Like Hermione, I think he would be a great source of great conversation. And since it’s a New Year’s Eve party, I suppose he could supply the drinks and find us an elegant room in which to party. And fans know his stance on jokes (they are great).

Yes, Tyrion is definitely someone I would like to drink and know things with at my New Year’s party.

If you have read (or watched) The Martian then you know that Mark Watney is not only smart but a hilarious individual. I feel like he, along with Fred, George, and Tyrion would keep the party going with some fantastic banter, great commentary on 80s music, and who could better be our sound/tech guy? You know, as long as he doesn’t blow anything up.

If you know me and didn’t see this coming, then you don’t know me very well. I have loved The Great Gatsby for years. I have read it multiple times, written numerous papers on it arguing different theses, and I have waxed poetic on the positive result of having it in a school curriculum. It also helps that Leonardo DiCaprio is my one true (after my husband of course) and that Robert Redford is a magnificent Gatsby. No matter what your thoughts are on Gatsby or the film portrayals, you can’t deny Gatsby could throw one hell of a party.

Just tell him Daisy will even just hear about the party and it’s on.

There you have it. I think I’m on my way to one heck of a New Year’s Eve bash.

What do you guys think of my choices? Who would you choose?