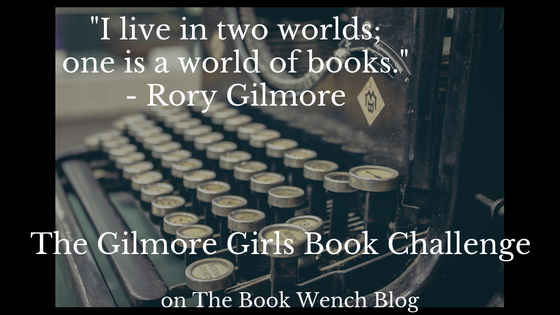 In honor of the recent release of Netflix’s Gilmore Girls: A Year in the Life I have decided that I would like to take on a Gilmore Girls-themed book challenge next year.

For the challenge, I will be choosing books from a list featuring books referenced/read in the original series and the Netflix revival. I found the first list on Buzzfeed and only made one change to it (Oliver Twist was not on the list and I only just recently re-watched the episode where Rory and Jess make reference to it!). The second list I adapted from Bustle and made sure there were no repeats or non-specific references (like references to the author but not a particular book).

As someone who read a lot in college and high school and took multiple Honors/AP/Advanced level literature classes, I am a bit ashamed to say I have only read 49 books out of the 351 listed below. I marked the ones I have read with a strike. That leaves me with 302 more books to read! 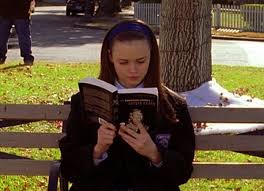 While I will certainly not be able to read all 302 books next year (or even in the next five years without completely ignoring author requests, new releases, sleep, food, and life) I would like to complete a somewhat auspicious challenge.

I am going to mix this with the 2017 POPSUGAR Reading Challenge as well. Any books I read for the Gilmore Challenge will be applied to the Popsugar challenge where possible.

I’m only going to set a minimum goal of 12 books from the original series and 3 from the Netflix revival, but my hope is that I will read at least twice that number, especially since another challenge will be in play. The Gilmore Girls Book Challenge is for personal satisfaction and posterity and even if I only read the 15 I will be happy and will merely aim to do the challenge again in 2018.

If anyone would like to join me, I will be starting the first of the year and will keep the blog and my Instagram updated periodically with my progress! I haven’t yet chosen the books I want to start with, but I will be posting on January 1st and I will certainly have the books picked out by then. (If anyone has any recommendations on where I should start, let me know below!)

If you join in on your own blog, Instagram, or Twitter feel free to use the hashtag #thebookwenchgilmorebookchallenge

May the odds be ever in your favor!

PS: If I have missed any books or you see anything that you think shouldn’t belong, let me know in the comments and I’ll fix it ASAP

3. Alice in Wonderland by Lewis Carroll

4. The Amazing Adventures of Kavalier & Clay by Michael Chabon

5. An American Tragedy by Theodore Dreiser

9. The Archidamian War by Donald Kagan

10. The Art of Fiction by Henry James

12. As I Lay Dying by William Faulkner

14. Autobiography of a Face by Lucy Grealy

17. Backlash: The Undeclared War Against American Women by Susan Faludi

18. Balzac and the Little Chinese Seamstress by Dai Sijie

20. The Bell Jar by Sylvia Plath

24. The Bielski Brothers: The True Story of Three Men Who Defied the Nazis, Built a Village in the Forest, and Saved 1,200 Jews by Peter Duffy

25. Bitch: in Praise of Difficult Women by Elizabeth Wurtzel

26. A Bolt from the Blue and Other Essays by Mary McCarthy

36. The Children’s Hour by Lillian Hellman

39. A Clockwork Orange by Anthony Burgess

40. The Code of the Woosters by P.G. Wodehouse

41. The Collected Stories by Eudora Welty

42. A Comedy of Errors by William Shakespeare

44. The Complete Poems by Anne Sexton

46. A Confederacy of Dunces by John Kennedy Toole

47. The Count of Monte Cristo by Alexandre Dumas

49. Crime and Punishment by Fyodor Dostoevsky

50. The Crimson Petal and the White by Michel Faber

54. Daughter of Fortune by Isabel Allende

60. Death of a Salesman by Arthur Miller

63. The Dirt: Confessions of the World’s Most Notorious Rock Band by Tommy Lee, Vince Neil, Mick Mars and Nikki Sixx

65. The Divine Secrets of the Ya-Ya Sisterhood by Rebecca Wells

72. Ella Minnow Pea: A Novel in Letters by Mark Dunn

74. Emily the Strange by Roger Reger

82. Everything Is Illuminated by Jonathan Safran Foer

86. The Fall of the Athenian Empire by Donald Kagan

87. Fat Land: How Americans Became the Fattest People in the World by Greg Critser

88. Fear and Loathing in Las Vegas by Hunter S. Thompson

90. Fiddler on the Roof by Joseph Stein

95. The Fortress of Solitude by Jonathan Lethem

102. George W. Bushism: The Slate Book of the Accidental Wit and Wisdom of our 43rd President by Jacob Weisberg

105. The Gnostic Gospels by Elaine Pagels

107. The God of Small Things by Arundhati Roy

108. Goldilocks and the Three Bears by Alvin Granowsky

109. Gone with the Wind by Margaret Mitchell

111. The Gospel According to Judy Bloom

112. The Graduate by Charles Webb

113. The Grapes of Wrath by John Steinbeck

116. The Group by Mary McCarthy

120. A Heartbreaking Work of Staggering Genius by Dave Eggers

122. Helter Skelter: The True Story of the Manson Murders by Vincent Bugliosi and Curt Gentry

127. The History of the Decline and Fall of the Roman Empire by Edward Gibbon

129. The Holy Barbarians by Lawrence Lipton

130. House of Sand and Fog by Andre Dubus III

131. The House of the Spirits by Isabel Allende

132. How to Breathe Underwater by Julie Orringer

136. The Hunchback of Notre Dame by Victor Hugo

139. In Cold Blood by Truman Capote

141. Inherit the Wind by Jerome Lawrence and Robert E. Lee

143. It Takes a Village by Hillary Rodham Clinton

147. The Jumping Frog by Mark Twain

148. The Jungle by Upton Sinclair

149. Just a Couple of Days by Tony Vigorito

150. The Kitchen Boy: A Novel of the Last Tsar by Robert Alexander

151. Kitchen Confidential: Adventures in the Culinary Underbelly by Anthony Bourdain

155. Leaves of Grass by Walt Whitman

156. The Legend of Bagger Vance by Steven Pressfield

158. Letters to a Young Poet by Rainer Maria Rilke

159. Lies and the Lying Liars Who Tell Them by Al Franken

164. Little Women by Louisa May Alcott

166. Lord of the Flies by William Golding

167. The Lottery: And Other Stories by Shirley Jackson

168. The Lovely Bones by Alice Sebold

169. The Love Story by Erich Segal

172. The Manticore by Robertson Davies

174. The Master and Margarita by Mikhail Bulgakov

175. Memoirs of a Dutiful Daughter by Simone de Beauvoir

177. Me Talk Pretty One Day by David Sedaris

178. The Meaning of Consuelo by Judith Ortiz Cofer

180. The Merry Wives of Windsor by William Shakespeare

181. The Metamorphosis by Franz Kafka

183. The Miracle Worker by William Gibson

185. The Mojo Collection: The Ultimate Music Companion by Jim Irvin

187. A Monetary History of the United States by Milton Friedman

189. A Month Of Sundays: Searching For The Spirit And My Sister by Julie Mars

190. A Moveable Feast by Ernest Hemingway

192. Mutiny on the Bounty by Charles Nordhoff and James Norman Hall

193. My Lai 4: A Report on the Massacre and It’s Aftermath by Seymour M. Hersh

195. My Life in Orange: Growing Up with the Guru by Tim Guest

198. The Naked and the Dead by Norman Mailer

199. The Name of the Rose by Umberto Eco

200. The Namesake by Jhumpa Lahiri

202. Nervous System: Or, Losing My Mind in Literature by Jan Lars Jensen

205. Nickel and Dimed by Barbara Ehrenreich

210. Notes of a Dirty Old Man by Charles Bukowski

215. One Flew Over the Cuckoo’s Nest by Ken Kesey

216. One Hundred Years of Solitude by Gabriel Garcia Marquez

217. The Opposite of Fate: Memories of a Writing Life by Amy Tan

219. Oryx and Crake by Margaret Atwood

221. Our Mutual Friend by Charles Dickens

222. The Outbreak of the Peloponnesian War by Donald Kagan

223. Out of Africa by Isac Dineson

226. The Peace of Nicias and the Sicilian Expedition by Donald Kagan

230. Pigs at the Trough by Arianna Huffington

233. The Polysyllabic Spree by Nick Hornby

235. The Portable Nietzche by Fredrich Nietzche

236. The Price of Loyalty: George W. Bush, the White House, and the Education of Paul O’Neill by Ron Suskind

246. Reading Lolita in Tehran: A Memoir in Books by Azar Nafisi

252. R Is for Ricochet by Sue Grafton

270. Secrets of the Flesh: A Life of Colette by Judith Thurman

273. Sense and Sensibility by Jane Austen

277. The Shadow of the Wind by Carlos Ruiz Zafon

279. The Shining by Stephen King

284. Snows of Kilimanjaro by Ernest Hemingway

286. Social Origins of Dictatorship and Democracy: Lord and Peasant in the Making of the Modern World by Barrington Moore

287. The Song of Names by Norman Lebrecht

288. Song of the Simple Truth: The Complete Poems of Julia de Bugos by Julia de Burgos

289. The Song Reader by Lisa Tucker

291. The Sonnets by William Shakespeare

292. Sonnets from the Portuegese by Elizabeth Barrett Browning

294. The Sound and the Fury by William Faulkner

296. Stiff: The Curious Lives of Human Cadavers by Mary Roach

297. The Story of My Life by Helen Keller

302. Swimming with Giants: My Encounters with Whales, Dolphins and Seals by Anne Collett

304. A Tale of Two Cities by Charles Dickens

305. Tender Is The Night by F. Scott Fitzgerald

306. Term of Endearment by Larry McMurtry

307. Time and Again by Jack Finney

309. To Have and Have Not by Ernest Hemingway

311. The Tragedy of Richard III by William Shakespeare

312. A Tree Grows in Brooklyn by Betty Smith

314. The True and Outstanding Adventures of the Hunt Sisters by Elisabeth Robinson

316. Tuesdays with Morrie by Mitch Albom

320. Unless by Carol Shields

321. Valley of the Dolls by Jacqueline Susann

322. The Vanishing Newspaper by Philip Meyers

325. The Virgin Suicides by Jeffrey Eugenides

330. We Owe You Nothing – Punk Planet: The Collected Interviews edited by Daniel Sinker

331. What Colour is Your Parachute? 2005 by Richard Nelson Bolles

332. What Happened to Baby Jane by Henry Farrell

333. When the Emperor Was Divine by Julie Otsuka

334. Who Moved My Cheese? by Spencer Johnson

336. Wicked: The Life and Times of the Wicked Witch of the West by Gregory Maguire

339. The Yearling by Marjorie Kinnan Rawlings

340. The Year of Magical Thinking by Joan Didion

The List from Netflix’s Gilmore Girls: A Year in the Life

341. Annals of the Former World by John McPhee

344. I Feel Bad About My Neck; and Other Thoughts on Being a Woman by Nora Ephron

346. The Life-Changing Magic of Tidying Up by Marie Konde

347. My Struggle by Karl Ove Knausgaard

348. The Oresteia: Agamemnon; The Libation Bearers; The Eumenides by Aeschylus

349. Tevye the Dairyman and the Railroad Stories by Sholem Aleichem